Start a Wiki
A comic about a teen sidekick who puberty hit like a truck.

It's the "Golden Age" where truth and justice always prevail thanks to the Comic Code. Silver Queen and her sidekick Golden Girl are the defenders of Platinum City with their quick wits, quips, and acrobatics. However, some big changes have recently come rolling in with Golden Girl on the cups of womanhood. Now the fog of the code is thinning from her eyes as she begins to notice the irregularities around her for what we, the readers, would see them as and maneuver herself around them.

The Sorority of Sentinels

Founded by Silver Queen, they are a group of extraordinary women dedicated to protecting the people from villainous attacks.

A group of teen heroes and sidekicks who banded together to form their own super crime fighting team. Nothing has really been done with them yet. 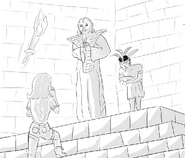 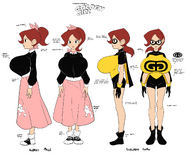 Lucìa Delgado
Add a photo to this gallery

The comic gallery is getting too big, so the rest of the comics can be found here.

Add a photo to this gallery

Retrieved from "https://the-conservatory.fandom.com/wiki/The_Developing_Adventures_of_Golden_Girl?oldid=10959"
Community content is available under CC-BY-SA unless otherwise noted.